On the streets of Saipan, the conversations of passersby are a blur of Korean, Japanese, Russian, and—much less often—the island’s native language of Chamorro. Once widely spoken across the Northern Mariana Islands and Guam, native speakers now number only in the tens of thousands, and they form isolated groups within the tiny archipelago in the western Pacific Ocean. Chamorro is on the cusp of endangerment. Before it becomes another lost language, a team of UC Santa Cruz linguists are using it to decipher how we understand sentence structure.

The chance to analyze Chamorro outside of a laboratory setting drew UC Santa Cruz professors Matthew Wagers and Sandy Chung to the tropical spot. There, they work with Manuel Borja, a Chamorro author and educator, to understand how native speakers comprehend and process the language’s distinctive grammar. Their work is not simply an exercise in examining the exotic.

Observing a language in action, part of the field of psycholinguistics, offers a window into the workings of memory and the logic we use to communicate.

There are two sets of translations. The word cues are first. In bold are sentences, some provided by Chamorro speakers, to describe the image. Illustrations by Nicole Goux. 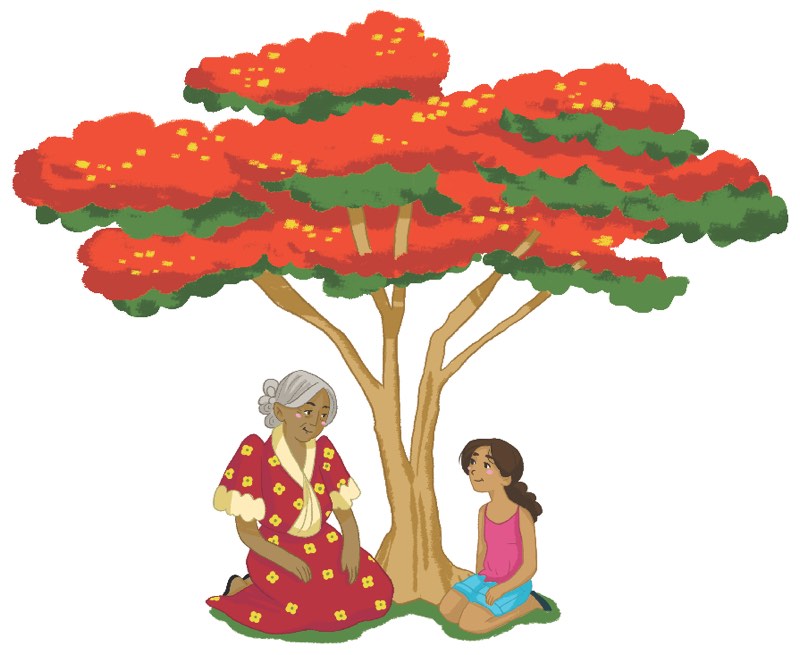 "The old lady and the little girl are under the tree." 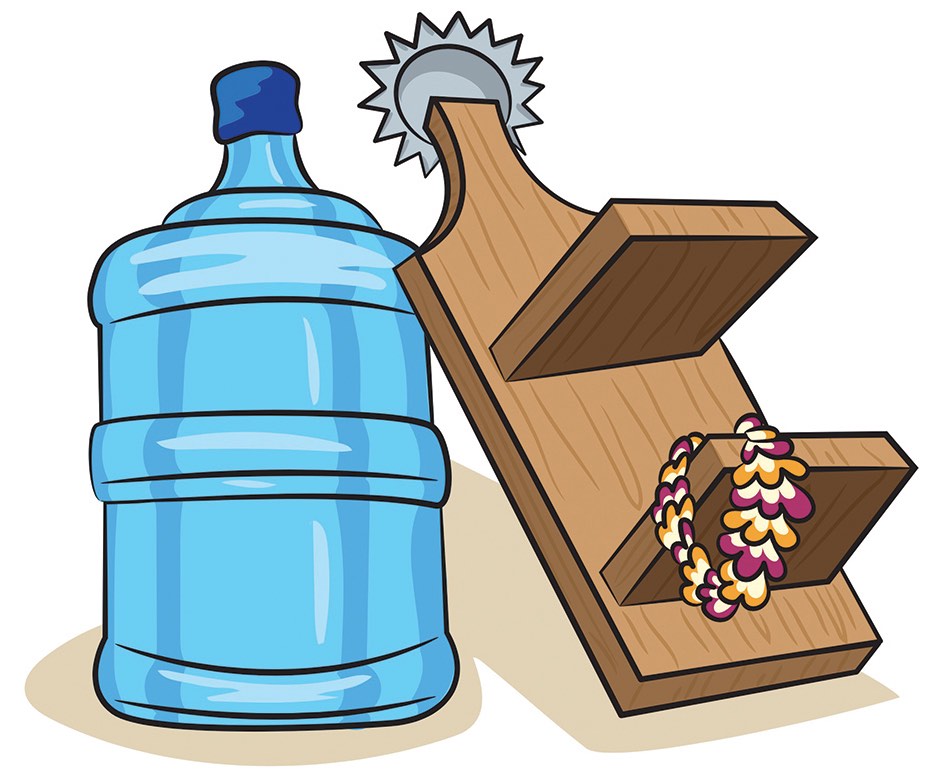 "That grater that is leaning on the water bottle."

(Actual phrase uttered by a Chamorro speaker in a production experiment. A kåmyu is the wooden object depicted with the lei. You sit on it, like a bench, and use the serrated edge at the tip to grate coconut.)

So far, such studies have led to a theory that the human brain relies on common mechanisms for language processing, regardless of what’s being spoken. But nearly 85 percent of psycholinguistics research is based on studying one-tenth of the world’s languages. That’s akin to studying cats and horses and assuming we know how all animals function.

“When we see certain patterns across French, German, and English, we might say, ‘Aha, this is how the mind is wired to process language.’ Well it could be that, or it could be how the mind is adapted to those specific languages,” said Wagers. “Only by looking at distinct languages with different kinds of grammar, like Chamorro, can we see if the same mental patterns hold true.”

Like much of life on the archipelago, the Chamorro language has been shaped by the foreign cultures that arrived on these shores, war after war. Since 1668, the islands have been held by a succession of countries: Spain, Germany, Japan, and finally, the United States.

With every political wave, Chamorro people were encouraged—sometimes forcibly—to learn a new language. But economic prosperity, not colonization, pushed the Chamorro language to the brink of extinction. As money and jobs flowed into the islands under U.S. governance, most homes had two working parents and children were often cared for by workers whose only common language with their charges was English.

“When I first went to Saipan, I remember lots of little kids under the age of five who spoke Chamorro,” said Chung, who’s been going to the island since 1976. “Then they went to English-language schools and spoke English after school with their caregivers. So this generation, from the early eighties to the early nineties, grew up not speaking Chamorro. That was an amazingly rapid language loss.”

The endangered language has a grammar and structure uniquely suited to draw in a linguist. Rather than a classic subject-verb structure, such as “Lisa ate her dinner,” Chamorro sentences often begin with a verb that’s conjugated in myriad ways depending on its subject, type of action, and other features. A single verb at the start of a sentence can speak volumes.

In English, the past tense of a verb such as “kissed” is the same, independent of the person performing the action: “He kissed” and “you kissed” use the same verb. In Chamorro, however, “he kissed” turns into “achiku” while the latter is “unchiku,” so the sentence makes sense even without a subject. For questions, Chamorro verbs are inflected in a special manner called Wh-agreement, in which the form of the verb reflects the grammatical relation between “what” or “who” and the missing material at the end of the question. 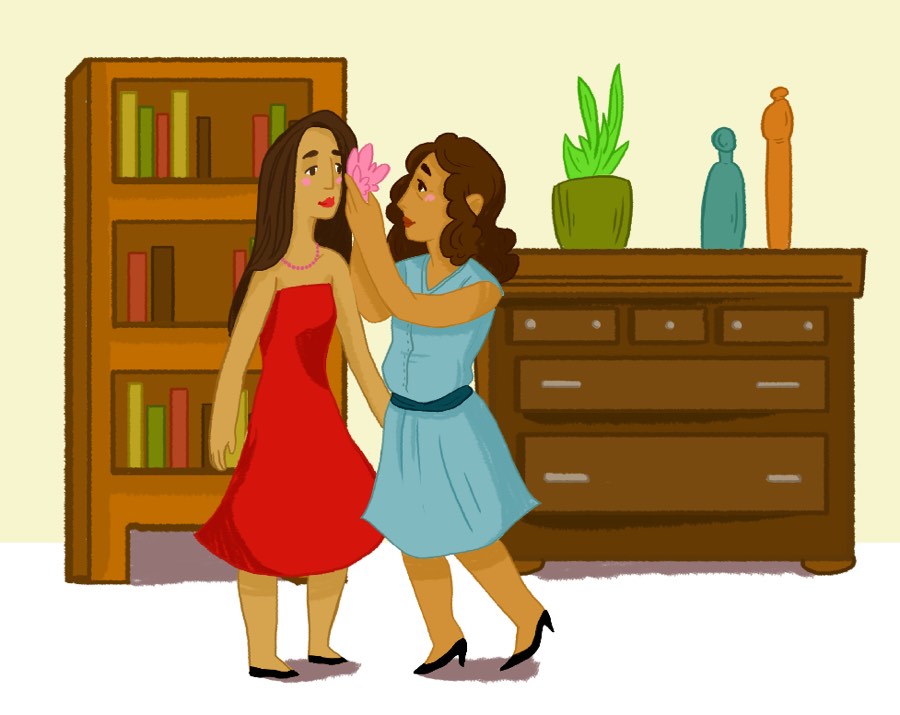 "She put a plumeria flower on Bernadita when she was done with her necklace." 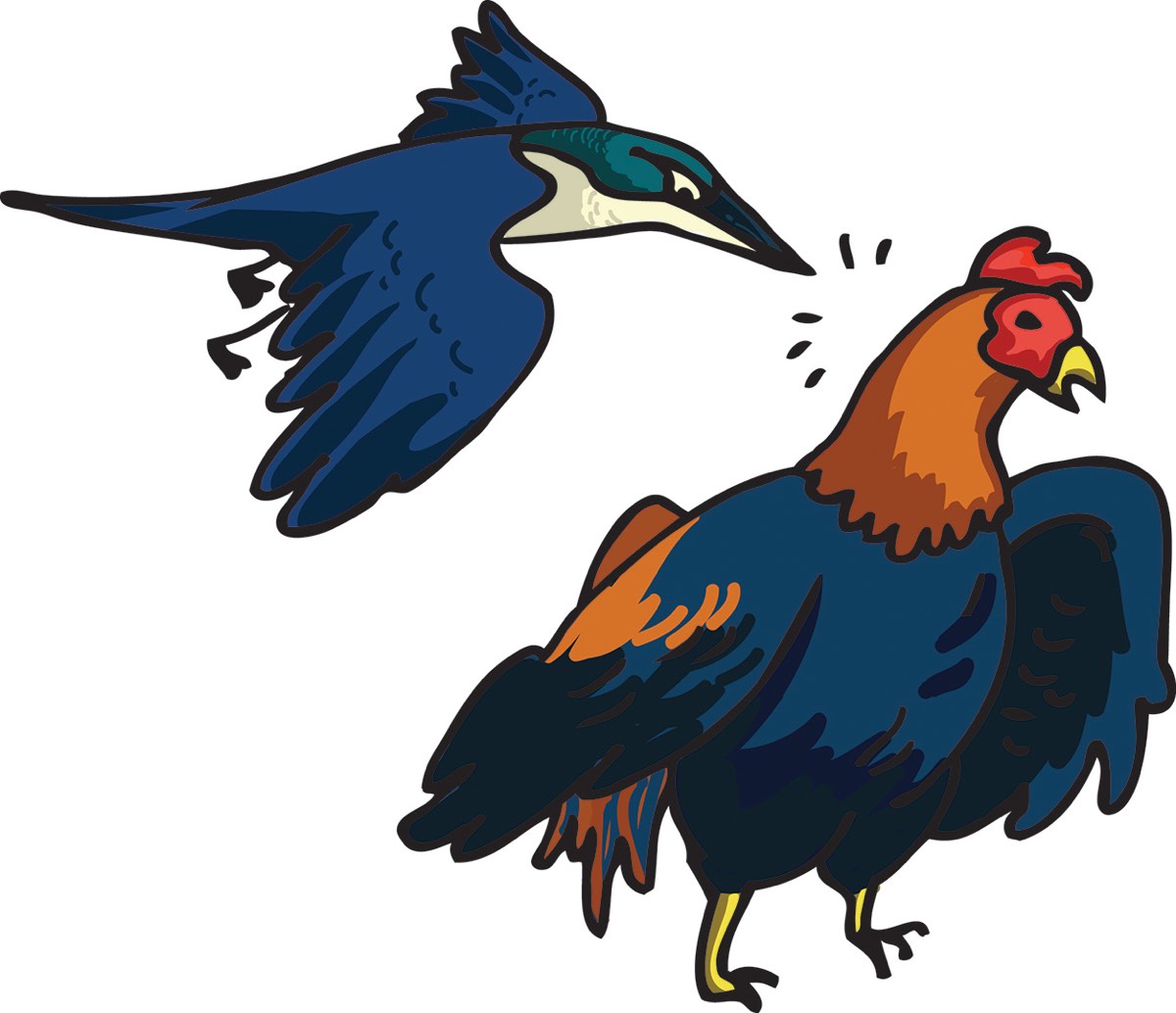 "That kingfisher's the one that's pecking the rooster."

These complex words and phrases fascinated Chung. But adapting lab-developed psycholinguistics experiments, which often rely on standardized methods and designs, to field studies of a lesser-studied language like Chamorro had rarely been attempted.

A rich—yet fragmented—past has left the older Chamorro speakers more proficient in the language than younger adults. Yet, speakers have varying levels of literacy in Chamorro; many rarely see the language in print, and the language has at least two different writing and spelling systems.

Furthermore, the tightly knit island community doesn’t readily welcome outsiders. In the early years of her studies, Chung worked closely with Borja, a retired teacher. “We couldn’t post a notice at the library and expect people to show up for experiments,” she said. “We would go out and meet the people who knew the people we knew—that’s the kind of culture it is.”

So, the first question the research group faced was simple: Were psycholinguistic studies of Chamorro even possible?

At research institutes around the world, psycholinguists rely heavily on student participants who volunteer to take tests in exchange for cash or class credit. Participating in a research study is often a requirement for basic undergraduate courses, according to Wagers. “At universities, we tend to think of the student population as a very renewable resource for experiments,” he said. “That’s really not possible if you’re in someone’s community or their home—it changes your perspective on how you treat a participant in a study.”

Working in the field also required Chung and Wagers to modify their experiments significantly. Lab experiments typically last at least 40 minutes, some can extend over hours. So the team adapted all their study tasks to be no more than 15 minutes long from start to finish. Many of their experiments measure reaction times or finger movements when a participant swipes and taps on an iPad.

In one experiment, participants were asked to link a spoken phrase to one of two pictures that represented its meaning. The researchers worked with an illustrator to create culturally relevant images that included coconut crabs, kingfishers, and flame trees rather than less familiar Western species.

Although their work wasn’t specifically designed to revive the Chamorro language, it’s raised interest in indirect ways. In addition to the psycholinguistics studies, Chung and Borja are part of a project to create a comprehensive Chamorro dictionary. One of Wagers’ students is working on a browser extension to translate Chamorro on websites.

In a 2015 study published in the journal Language, the team observed how Chamorro speakers reacted to question statements to see if the mental processes involved are similar to those in English. 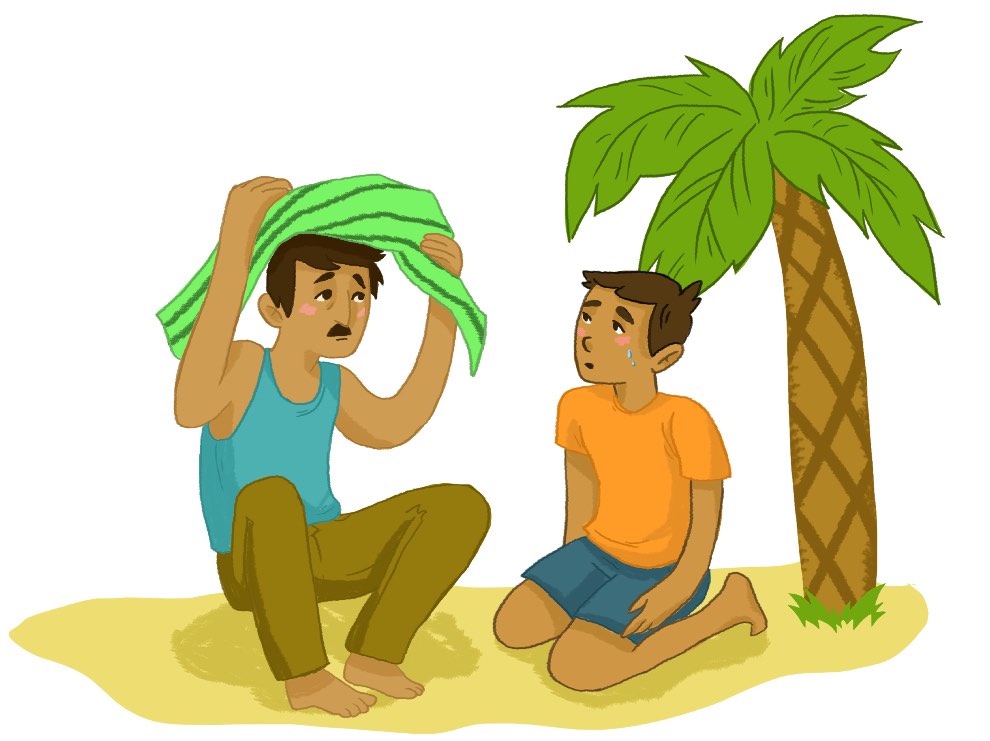 "It's a hot day. The dad covered himself with a towel, because he was burned by the sun." 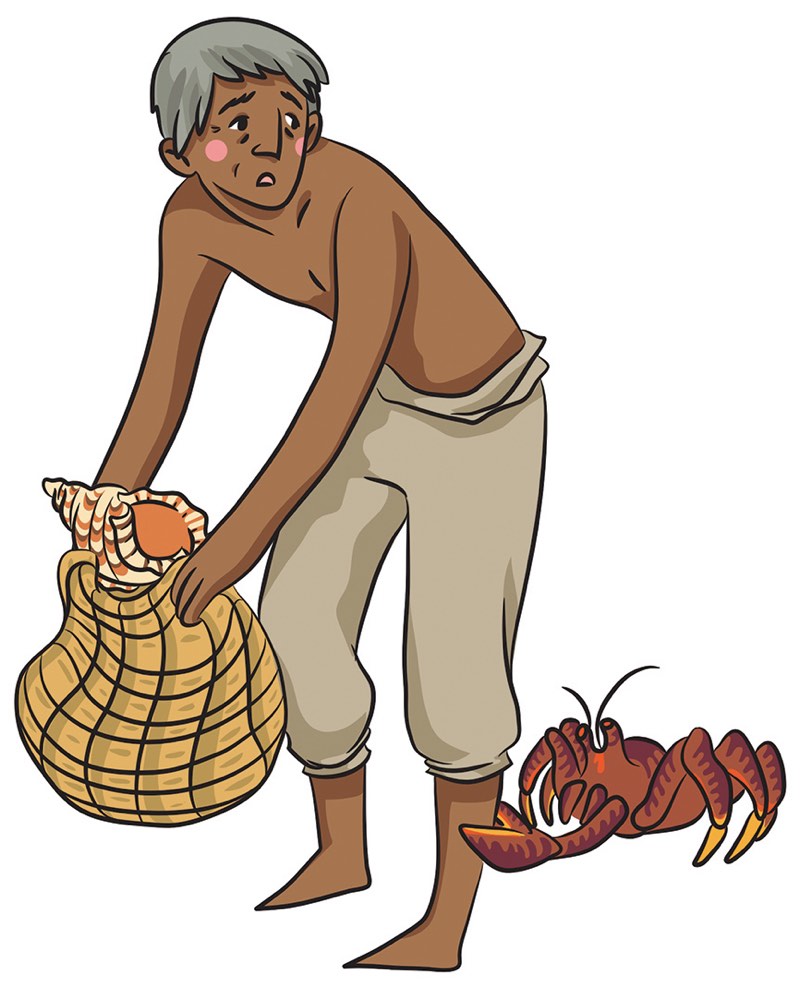 "That old man who is bending and holding a bag, his leg is bit by a crab."

(Actual sentence produced by a Chamorro speaker in a production experiment.)

When a sentence such as “John chopped the steak with the cleaver” is turned into the question “What did John chop the steak with?” speakers move the words around so that the subject of the question moves to the front of the sentence. The way people connect the first word in that question, in relation to the position in which it originally appeared, hints at how we use memory to understand language.

Previous studies of English have suggested that the instant listeners hear a question word, they begin to guess what the question is about. Asking “What did John chop?” elicits guesses such as, “Is this about the object he chopped? Or the instrument he used?” And so forth. These quick predictions partly explain why we’re able to use language without pauses. If we waited, the added processing time, perhaps hundreds of milliseconds, would make conversations sound stilted or cause listeners to forget what they heard.

In Chamorro, questions often begin with a verb that’s uniquely inflected to tell a listener precisely what the question is about, so they don’t need to make those quick guesses. Rather than predictively parsing what a question might mean, Chamorro listeners appear to simply wait a little longer for the disambiguating word.

“As a listener, you wouldn’t make too many aggressive predictive guesses because all of the information is going to come in a relatively tight packet and you can say—okay, that’s what they mean, I’m not going to waste my time making wrong guesses,” said Wagers.

Predictive parsing works in a top-down way. Even as our brain receives external information, it begins to fill gaps or make guesses based on previously stored knowledge. An alternative mechanism, called bottom-up processing, could work by pausing to listen to incoming cues before ascribing meaning to words. While top-down mechanisms might help English speakers think fast, bottom-up processing might be more efficient when processing Chamorro questions.

“Without sampling different languages, it’s impossible to know whether we’re biased in estimating how these two mechanisms interact,” said Wagers. “When we come up with a theory on language processing based on English, is that a universal wiring diagram for how things work in your mind?”

Chung and Wagers’ studies of Chamorro suggest that the way top-down and bottom-up processing work together is adapted to the structure of individual languages. Moreover, the pattern of top-down parsing that seemed so widespread among languages was not present in Chamorro.

There’s an emerging view that the design characteristics of working memory are shared between language and other processes, noted Wagers. “We might have a dedicated neural circuit for language and another for remembering where the car is parked, but the construction of both circuits is likely the same,” he said. Assuming a processing mechanism is the default based on studies of just a few languages might make us miss other ways our brains work—or fail, he added.

As Chung and Wagers investigate Chamorro’s linguistic idiosyncrasies, their research is revealing the brain’s blueprints for building these circuits.