Beth Shapiro spends a lot of time on the northern end of the planet, excavating frozen bits of creatures that lived long ago. on these mucky, mosquito- infested field trips, she searches for DNA that still lingers in the bones, hair, tusks and skin of ice-age-era mammals like musk ox and mammoths. Then, back in the Paleogenomics lab at UC Santa Cruz, she calculates how old the specimens are, extracts their DNA, and carefully decodes this ancient genetic material.

By revealing changes in genetic diversity through time, ancient DNA can shed light on species’ evolution and extinction. Combining that information with climate records and other historical data, Shapiro can also show how shifts in the environment drove these changes. This kind of research offers a new way to understand the life of Pleistocene animals, plants, and early humans. The epoch, marked by glacial and interglacial cycles, lasted from 2.6 million to 11,700 years ago.

In addition, this examination of the prehistoric has potential for future conservation–by learning why some species proved more vulnerable to past climate changes or human influence.

“We can use that information to make predictions and plans about what to do for species that are being affected by climate change today,” said Shapiro, an associate professor of ecology and evolutionary biology at UCSC. her work has generated new discoveries and garnered a “genius grant” from the MacArthur foundation.

So far, the oldest sequenced genome fragment, from a 700,000-year-old horse, is more than half a million years older than biochemists had predicted could survive. Shapiro and her collaborators identified the age of the extremely old permafrost layer where it was found, and sequenced and analyzed the genetic material. The data, including other ancient and modern horse DNA, indicated big fluctuations in the horse population that corresponded with extensive climatic changes. The journal Nature published the results in 2013.

The horse DNA weathered 700 millennia only because it landed in permafrost, which acts like a giant freezer for everything from mammoth kneecaps to musk ox horns.

That’s why the frozen expanses of the Yukon, Alaska and Siberia are prime research territory for Shapiro. These lands are also the terrestrial remnants of the Bering land Bridge that once connected Asia with North America. The area hosted herds of megafauna and saw major Pleistocene extinctions.

This bone-rich “laboratory” gives her research team a large-scale opportunity to understand how species responded to climate changes before, during, and after the last ice age, which peaked about 20,000 years ago. They find remains “wherever permafrost is melting: at sites of active riverbank gold mining, or during spring, when snowmelt makes the rivers run high and fast, and water washing around the bends digs through the permafrost, exposing bones stored within,” Shapiro said.

Climate change is now causing a bigger meltdown. A boon for research in the short-term, it threatens to defrost ancient DNA along with the once “perma” frost.

Shapiro’s compass did not originally point to a life of research in Arctic environs. As an undergraduate and former journalism major at the University of Georgia, she signed up for a field geology and anthropology course one summer, so she could travel west and camp in national parks. That sparked her interest in science, and she graduated with a Bachelor of Arts and Master of Science in ecology.

“Every major decision I’ve made in my life seems to be based on where I get to go,” said Shapiro. 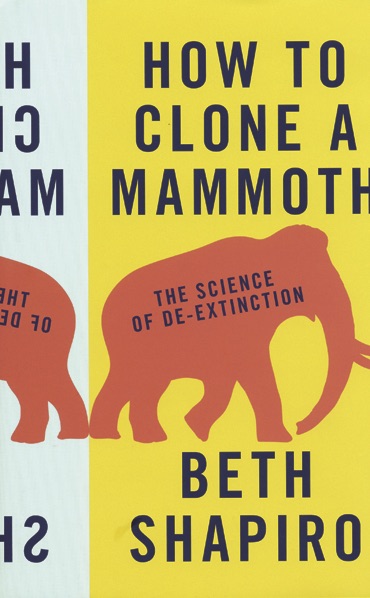 Shapiro's brand-new book, How to Clone a Mammoth: The Science of De-Extinction, isn't a how-to manual. Making an exact copy of an extinct animal is impossible. But some day, an animal might be assembled with some of the genetic code from an extinct one.

The idea is controversial, scientifically difficult, maybe unattainable, and poses all kinds of quandaries. Yet it's worth exploring the ideas, the goals, the impacts and the ethics, said Shapiro. Her book disentangles current-day science from science fiction, and argues that reviving individual species is misguided and probably unethical.

But she sees value in resurrecting extinct traits to "help living species adapt to a changing environment," and to revitalize and restore ecosystems and biological interactions.

Shapiro is a faculty member of the UCSC Genomics Institute's Genome 10K Project, which aims "to understand how complex animal life evolved through changes in DNA and use this knowledge to become better stewards of the planet." The project is working toward assembling a collection of DNA sequences that represent the genomic diversity of 10,000 vertebrate species.

One of the possibilities, she said, is to identify mutations or diversity that once existed within a population, "and then come up with new technologies to reengineer these populations on the brink of extinction to contain diversity that's recently been lost."

"De-extinction could be a game changer for our modern conservation crisis and that is what makes the science potentially so useful," she concluded.

After college, she wanted to study in england, so she applied for both Rhodes and Marshall scholarships. landing the prestigious Rhodes took her to oxford, where she met ancient DNA pioneer Alan Cooper. he did fieldwork in the Yukon and Siberia; she signed on as his first grad student and has continued to travel north ever since.

Shapiro got her start when the discipline was still young. Analyzing ancient DNA was barely possible until the advent, three decades ago, of a gene- amplifying process called polymerase chain reaction. Although PCR is still in use, the emergence of next-generation sequencing (NGS) technology reinvigorated the field. This newer technique homes in on the genetic molecules of interest and can work with even the smallest shreds of DNA; it also costs less and produces reams of data that can be crunched with computational approaches.

“We can use… information to make predictions and plans about what to do for species that are being affected by climate change today.”

“NGS is a huge advance. We’ve been able to get DNA from older bones than we ever thought possible, and we have begun to get DNA from unlikely places like hot tropical sites,” said Shapiro.

The genetic material from older specimens and warmer sites tends to be the most fragmented and difficult to reconstruct. even with NGS and frozen DNA, the task is challenging. DNA is easily damaged. Mutations accumulate during a lifetime, and after death, DNA succumbs to water damage, oxidation, bacterial decay, UV light and other elements. (Thus Jurassic Park is off the table–dinosaur DNA has completely disintegrated.)

Contamination is another technically demanding issue. Ground-up mammoth bone, for example, contains DNA from all sorts of sources, including bacteria, fungi, and other organisms that colonized the bone–and sometimes the genetic material of the people who handled it in the field or in the lab. In fact, many of the first scientific claims for ancient DNA sequences turned out to be sequences from modern humans instead.

“Contamination is easier to detect now and we have good techniques and protocols to prevent it during excavation and transfer to the lab. But it’s still difficult to distinguish host from non-host DNA,” Shapiro said.

Shapiro’s discoveries have overturned a few ideas. It turns out that late Pleistocene extinctions started earlier and lasted longer than previously realized. Many species began to decline about 40,000 to 35,000 years ago in a warmer interglacial period, significantly before the coldest temperatures, and long before humans arrived in the area around 14,000 to 12,000 years ago. While human hunting likely weakened the already small and genetically constricted populations, it did not set off the chain of events as one theory suggested.

Researchers compare the amount of genetic diversity in a species over time by sequencing DNA from living animals as well as those that lived at different time periods. lots of diversity correlates with big populations, while less diversity means small populations.

“We’re learning from hard empirical evidence. one thing we see is that species did not respond to climatic stress in the same way as each other,” Shapiro said. The wooly rhino, wild horses, and mammoths went extinct. But caribou, bison, and musk ox survived, although they experienced a drastic drop in genetic diversity.

All these megafauna actually thrived in cold periods. Perhaps the warm interglacial and post-ice-age periods caused the most strain, Shapiro suggested, favoring species that were better able to move between patches of suitable habitat–as habitat, too, shifted in response to climate fluctuations.

Shapiro keeps returning to the site of this huge natural experiment–next year she’ll bring undergraduates on a new, every-other-summer, UCSC Arctic ecology field course–unearthing the past, in part to contribute to making sound conservation decisions for the future.

“Genetic diversity is disappearing from this planet at an astounding rate,” said David Haussler, UC Santa Cruz distinguished professor of biomolecular engineering and co-founder of the Genome 10K Project that Shapiro is now a leader of. “Beth is just the kind of charismatic thought leader we need right now to help forge the way forward. She is totally unafraid of new ideas, and brilliant enough to make them work.”